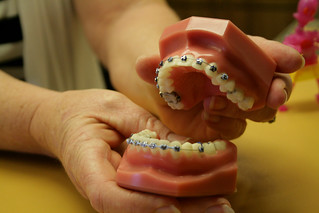 By Timberlake Dental curated from www.townandcountrymag.com

“Evidently, despite teenage straightening efforts, our stubborn teeth would like nothing better than to resume their previously loathsome positions. “They always want to go back to where they were,” Lowenberg says. “We learned that in the very first orthodontia lecture at school: Teeth have memory.” Whether migration happens to such a degree that a person decides to do something about it is another matter. “Stability with anything in the body doesn’t exist,” says New York based orthodontist Adam Schulhof. “I would say all the adults who have ditched their retainers will have movement.””

As stated in the article, “Although lingual braces like Incognito, which deliver a straighter smile using discreet braces that go behind the teeth, are certainly appealing, they’re by far the costliest option: $10,000, roughly twice the price of traditional braces. According to Schulhof, a linguals expert who treats a steady stream of appearance-obsessed New Yorkers, that hefty price tag has something to do with a robot in Germany that customizes the wires that go through his patients’ brackets. Cutting-edge teeth guys like Schulhof and New York–based orthodontist Marc Lemchen believe that customization—via wires, brackets, or aligners—is the wave of the future. “Why would anybody want something off the rack if they can get it customized?” Schulhof asks. “If you went to a plastic surgeon, you wouldn’t want him to have one nose he does for everybody, right? It’s the same with moving teeth.”

Posted by chowning940 on Jul 14th, 2016 6:25 pm
Filed under Health, Oral Health Tips . You can follow any responses to this entry through the RSS 2.0 feed. Both comments and pings are currently closed.